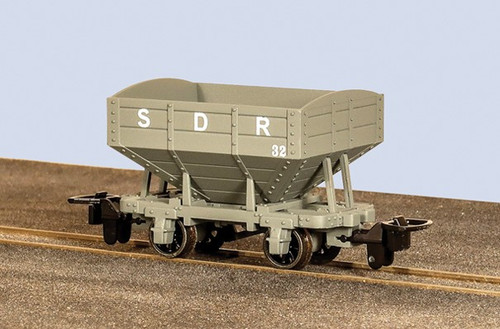 The Snailbeach District Railways system was located in Shropshire and was built to carry lead ore over a narrow gauge route with a gauge of 2ft 4 inches. The mines were located at Stiperstones and they transferred their ore to a connection with the Great Western Railway at Pontesbury.  A fleet of various hopper wagons was used to transport the ore and it is one of those wagons that is the subject of our new model. Opened in 1877 the railway was finally closed in 1959, latterly using tractors to move the hoppers after the end of steam.

No. 32, the sole wagon that is still in existence in preservation. All of the models feature finely detail moulded parts, a separate OO-9 coupler on each end that slots into an NEM pocket, and the new metal-rimmed wheels.