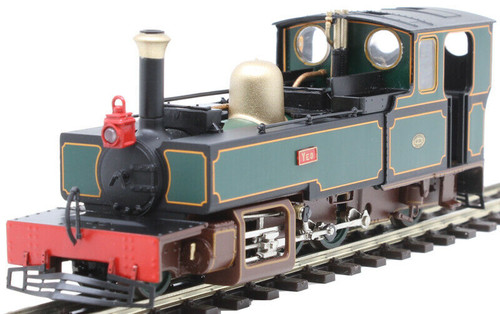 Heljan 99501 OO9 Narrow Gauge Lynton & Barnstaple 2-6-2T 759 "Yeo" in L&B Dark Green DCC Ready. 6-pin socket The Lynton & Barnstaple Railway (L&B) opened as an independent railway in May 1898. It was a single track, 1 ft 11 1/2 in (597 mm) narrow gauge railway and was slightly over 19 miles (31 km) long running through the rugged and picturesque area bordering Exmoor in North Devon, England. Although opened after the 1896 Light Railways Act came into force, it was authorised and constructed prior to that act. Therefore, as with all other railways, it was authorised under its own Act of Parliament and built to higher (and more costly) standards than similar railways of the time. In the United Kingdom it was notable as being the only narrow gauge line required to use main-line standard signalling. For a short period the line earned a modest return for shareholders, but for most of its life the L&B made a loss. In 1923 the L&B was taken over by the Southern Railway, and eventually closed in September 1935.