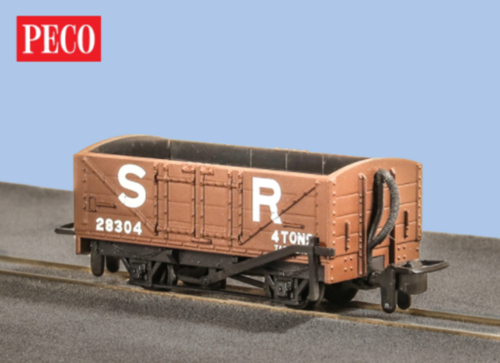 A detailed model of Southern Railway wagon 28304, one of the former Lynton and Barnstaple Railway open wagons. A free running OO9 model featuring plenty of detail with separately fitted brake hangers, brake levers and vacuum pipes. The Lynton and Barnstaple Railway was well equiped with, by narrow gauge standards, large 4-wheel open wagons and box vans supplied by the Bristol Railway Carriage and Wagon Company. At 4 tons capacity the open wagons were roughly half the capacity of a standard gauge coal wagons of the same period and well suited to the delivery of coal and agricultral goods on the narrow gauge line. Following the sale of the L&B to the Southern Railway the wagons were renumbered into the Southerns' goods wagon numbering system.