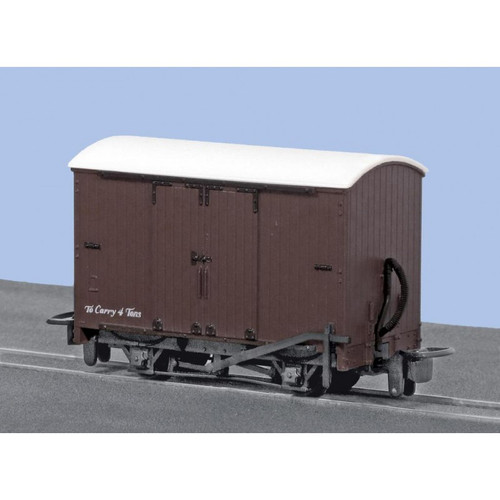 OO-9 BOX VAN UNLETTERED BROWN These finely detailed ready to run coaches and wagons are accurately modelled on the rolling stock of the Lynton and Barnstaple Railway, both as an independent railway and after its' absorption into the Southern railway in 1922. They are also available painted but unlettered for those modellers who wish to tailor them for use on other lines. A detailed model of the covered box vans built for the Lynton and Barnstaple Railway finished in the Southern Railways' brown goods wagon livery with black ironwork and unlettered except for the empty/tare weight information. These unlettered wagons are being produced to allow modellers to create a ready-to-run wagon fleet for a freelanced narrow gauge line. Lettering can be added from the many water-slide decal and dry transfer sheets available from transfer suppliers, stationery stores and specialist arts & crafts suppliers.