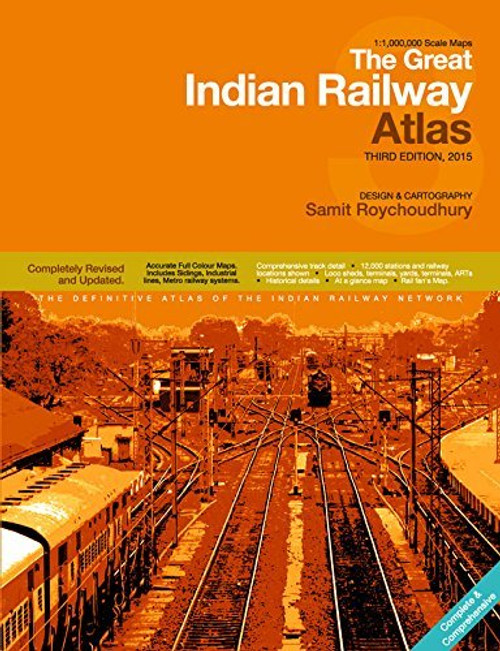 The Great Indian Railway Atlas by Samit Roychoudhury, Third Edition 2015 All of us who have been to India will know that getting good and accurate maps is not too easy. Samit Roychoudhury has set unparalleled standards for detail and accuracy in his Atlases of Indian Railways in the past and the Third Edition of his Great Indian Railway Atlas is no exception. The maps are larger, generally on a scale of 1:1,000,000 (16 miles to an inch) instead of 1:1,500,000 (24 miles to an inch) as used previously. That makes it easier to see all the detail that has been crammed in. And detail there is: sidings, industrial lines, metro railway systems, loco sheds, terminals, yards and more are all clearly shown. There are over 12,000 stations and railway locations marked, with a comprehensive index that will enable the reader to track down every possible detail. And its not just the established network: all newly opened lines are shown, and the different gauges used are clearly marked, so that the progress of the gauges unification project can be clearly seen. This new edition has taken nearly 18 months to prepare but the results are truly worth it. Whether or not you have a copy of the second edition the new Atlas is a must for your bookshelf, and to have with you on every future trip to India. When you are riding on a train and see a line bearing away to the left or the right, this will tell you exactly where it goes and what it does. Its indispensable! What it contains: A detailed series of maps of one of the world's largest railway networks, with accurate track alignments, providing up-to-date information on the tracks, stations, yards, etc. 93 pages of full colour maps, at 1:1,000,000 scale, referenced by a locator map with accurate alignments and over 12,000 locations, including existing and closed stations, sidings, control points etc. indexed with their respective station codes and clearly marked. Divisional and zonal headquarters identified, most closed lines and stations depicted and a majority of sidings and industrial lines shown. Tracks colour coded to show gauge, whether single or double, electrification, etc., with Divisional boundaries marked. Most works in progress shown including new lines, gauge conversions, electrification, and those still under survey, etc. Plus all loco sheds (electric, diesel and steam), and EMU/DMU car-sheds. Important freight yards, goods sheds and container terminals are marked with many detailed inset maps (mostly 5x scale) of complex areas. Theres a glossary of name/spelling changes and a single spread At-a-Glance map of entire system, showing the Divisions in detail.