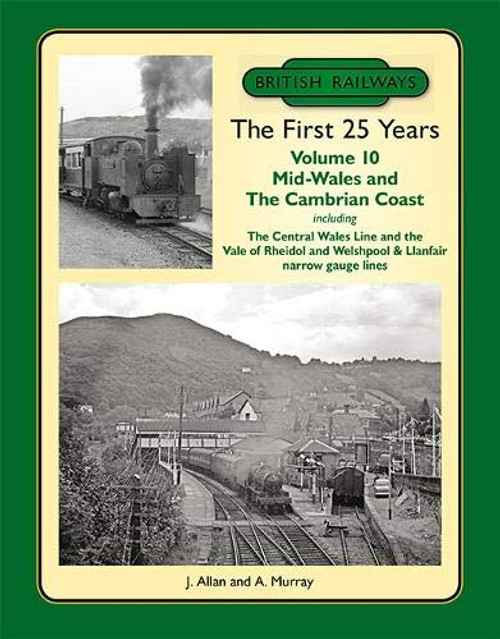 The eleventh in a series of books depicting the First 25 years of British Railways covers the lines in North Wales, Chester and the Wirral peninsular. We start at Gobowen on the Great Western Railway main line from Shrewsbury going north via Wrexham to the outskirts of Chester then back to Wrexham to pick up the former Great Central Railway line to the Wirral, ending on the banks of the River Mersey at Seacombe after calling at Croes Newydd, Rhosddu and Bidston engine sheds. While on Merseyside we look at the Wirral electric units, the pioneering main line electrified suburban system. After visiting the docks and Mollington Street shed, we return south from Birkenhead to Chester, branching off to Helsby and Frodsham. At Chester we untangle the complex of lines into General station and contrast this with the GCR and Cheshire Lines Committee Northgate station, and then visit the City?s three engine sheds and also Mold Junction. After the bustle of Chester, the rural line to Denbigh provides a complete contrast before we revert to the L&NWR main line along the North Wales coast passing through the popular seaside resorts, taking a short detour down the Dyserth branch, before resuming our journey to Llandudno Junction. After visiting the engine shed we travel down the two branches which start at the Junction, the short line to Llandudno and the Conway Valley line to Blaenau Ffestiniog. Regaining the main line we pass through the iconic tubular bridge at Conway. From Bangor we go down to Caernarvon on the branch to Afon Wen. Then we cross Robert Stephenson?s second tubular bridge over into Anglesey and take a trip up the branch to Amlwch before reaching Holyhead. Summer Saturdays saw a vast amount of holiday traffic, transforming the operation of the North Wales main line. The motive power on the ex-GCR lines had remained virtually unchanged for half a century until the mid-1950s when LM&SR and BR Standard engines took over from the Great Central designs. Chester General saw almost every LM&SR class up to ?Coronation? Pacifics and GWR types. North Wales was at the forefront of the introduction of DMUs in 1956. Main line diesels replaced steam gradually from 1959 onwards, although steam did enjoy a brief resurgence on the former GWR route after it was transferred to the LMR. On the Wirral, the original electric units were replaced in the mid-1950s when British Railways built more of the 1930s LM&SR design already in use there.

Cambrian Mainline - Scenes From the Past

Caernarvon and the Lines From Afonwen & Llanberis