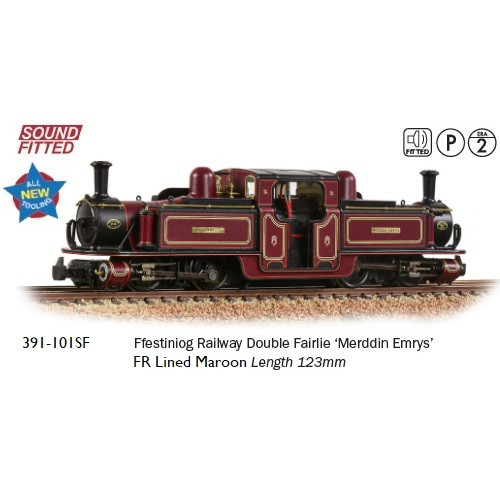 The Bachmann Narrow Gauge Double Fairlie locomotive follows in the footsteps of the award winning Baldwin 10-12-D, Bachmann Narrow Gauges first OO9 scale locomotive which was released to great acclaim in 2018. Synonymous with the Ffestiniog Railway, the Double Fairlie is an icon of the Narrow Gauge world and this instantly recognisable locomotive is now available in OO9 scale for the first time. The Bachmann Narrow Gauge model incorporates a high level of detail, with tooling designed to accommodate the detail variants seen on the real locomotives in order to produce a model of the highest fidelity, which is brought to life by the exquisite livery application that combines Ffestiniog Railway-specification colours with authentic lining, crests and plates. The precision moulded bodies are adorned with numerous individual components, including the real brass handrails and the metal tank filler cap rings, along with fine mouldings for parts such as the steam fountain, cab controls and tallow cups.