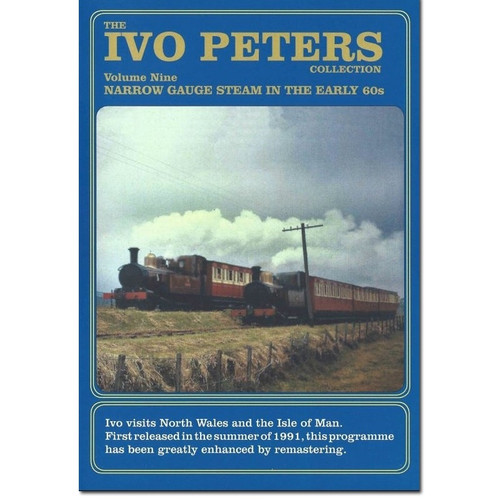 His 1961 and 1963 visits to the Tallyllyn Railway are seen next, with trains on the main line and locomotives being shunted at the then very basic Pendre Yard. The Welshpool & Llanfair follows with both "The Earl" and the "Countess". A brief visit to Tan-y-Bwlch on the Ffestiniog then rounds off our first section. New railways were rare in the early 1960s so Ivo was attracted to the Bicton Woodland Railway in East Devon where he filmed a 1916 built Avonside tank. The major part of this volume recalls Ivo's first visit to the Isle of Man in 1961. Here he filmed both the Groudle Glenn Railway and the Victorian charm of the main Isle of Man Railways, then still running (as they had done throughout the preceding 86 years) from Douglas to Port Erin, Peel and Ramsey.

There are comprehensive views of the locomotive depot and station at Douglas together with film on each of the lines including the spectacular "race" out of St.Johns! Plus some fabulous views and memories of the now closed line along the west coast. This volume was first released in 1991. In 2021 it was totally remastered i.e. the pictorial material has now been prepared from the original 1" master tape, transferred to digital betacam, remastered and then released on DVD.

Some minor picture and sound editing has taken place to enhance yet another very popular volume in our series.