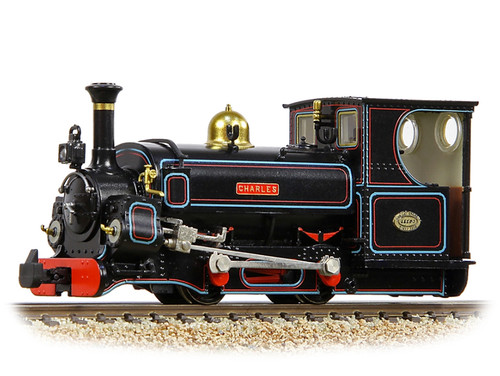 As part of the Bachmann Winter 2022 British Railway Announcements we are excited to unveil the all new Mainline Hunslets in OO9 scale from Bachmann Narrow Gauge. From our trio of launch models, we present ‘Charles’ in Late Penrhyn Quarry Lined Black livery.

Following the success of the multi-award winning Double Fairlie locomotives, we’ve chosen another prototype famous for its operation on the narrow gauge railways of North Wales to join the Bachmann Narrow Gauge range next. A Class of just three locomotives, each of the Mainline Hunslets can now be modelled faithfully at various points during their working lives thanks to our versatile tooling suite. Incorporating the highest levels of detail to produce a model of supreme fidelity, this Mainline Hunslet is brought to life by its exquisite livery application using the latest paint application techniques for the most authentic of finishes.

These small but mighty models feature a diecast metal saddle tank, cylinder block, frames and footplate; coupled with a precision moulded cab, smokebox and other separate detail components to produce a model that is strong and robust yet intricately detailed. The cab interior is a work of art and behind the hinged, posable firebox door, firebox lighting is fitted, and this operates on both analogue and DCC. Talking of DCC, with a Next18 DCC decoder socket and a pre-fitted speaker it’s easy to convert your model for DCC running – or why not make it even easier and opt for a SOUND FITTED model to really bring your layout to life!

Most famous for their operation on the North Wales narrow gauge railways, the first main line Hunslet was built in 1882 by the Hunslet Engine Company of Leeds for the Penrhyn Quarry Railway. Named ‘Charles’, the locomotive’s somewhat unconventional appearance, with steeply inclined cylinders and connecting rods located on the inside of the coupling rods, would be repeated eleven years later when ‘Linda’ and ‘Blanche’ were constructed. Known affectionately by many enthusiasts as ‘the Ladies’, they were ostensibly built to the same 0-4-0 saddle tank design as ‘Charles’, although the ‘Ladies’ did incorporate some differences when compared to their elder. They had larger fire grates for one, round spectacle glasses in the front cab sheet rather than the square ones fitted to ‘Charles’ for another, and were also fractionally longer.

Penrhyn Quarry was the largest slate quarry in the world at the end of the nineteenth century and the trio of Hunslets spent their days hauling slate trains over the Penrhyn main line from the vast quarry complex at Coed-y-Parc, near Bethesda, to Port Penrhyn, just a stone’s throw from Bangor on the North Wales coast. Here, slate products were transferred to standard gauge railway wagons or ships for onward transport around the UK and further afield. Whilst smaller locomotive such as the Quarry Hunslets were used to work the quarry’s internal railways, the larger, more powerful Mainline Hunslets worked the full trains from the quarry down to Port Penrhyn and brought the empty wagons back again – similar duties to those for which the Ffestiniog Railway employed the famous Double Fairlies.

During their working lives the three locomotives underwent several changes, all gained full-height rear cab sheets, replacing the original half-height sheets, welded tanks were fitted in place of the original rivetted versions and various sandbox arrangements were seen, amongst other improvements during their time on the Penrhyn line. By the mid-twentieth century traffic on the Penrhyn Quarry Railway was in decline and in 1962 the last trains ran. ‘Charles’ had already been retired in in the mid-1950s, but the Ladies worked on until the very end.

‘Charles’ was also offered for sale, but with the boiler condemned, the Ffestiniog Railway declined. Instead, ‘Charles’ was loaned to the National Trust and is now displayed at Penrhyn Castle – once the family home of the owners of Penrhyn Quarry.