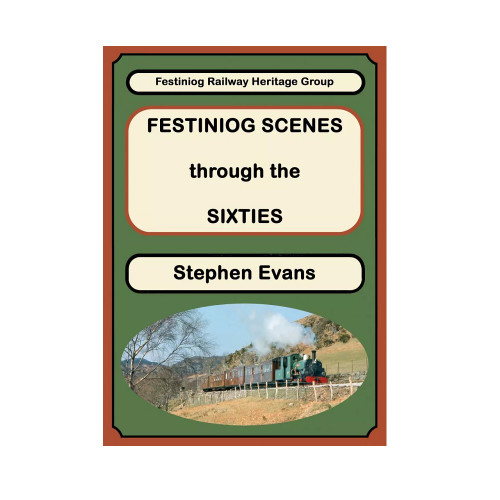 Festiniog Scenes through the Sixties by Stephen Evans, published by the Heritage Group

The author enjoyed a number of holidays working as a volunteer on the Festiniog Railway in the nineteen-sixties, recording the Railway as he experienced it in those long-gone days with hundreds of photographs, in both monochrome and colour. This unique personal record will take you pictorially through those exciting pioneer years during which the operational railway grew from 7½ to 9½ miles and its passenger numbers increased by more than 350%.

Lavishly illustrated, including some 245 previously unpublished pictures, around 100 of which are in colour, this book will transport those old enough to remember the sixties back by half a century, while younger readers also will surely enjoy the multitude of views of the historic Festiniog trains in the beautiful Vale of Ffestiniog landscape.

Dr Evans was born in 1947, and educated at Cheadle Hulme School in Cheshire before reading Chemistry at Balliol College, Oxford. The photographs in this volume almost all date from this early period in his life. In 1972 he moved to the University in Aberystwyth, and pursued a successful academic career in Inorganic Chemistry, publishing over eighty papers on his scientific research work. His interest in photography continued, however, throughout this period, and he recorded not only railway scenes but also many landscapes, especially in and around the mountains of North and Mid-Wales. After taking early retirement, he followed with interest the progress of the digital revolution in photography, and, recognising the potential historic value in his oldest photographs, he has restored and enhanced them digitally for this publication, his first book